Speculations of the week...

1. The new Google Calendar will be called...
Google CL2 - A calendar for you and the world

2. Microsoft device codenamed Origami. What you read on Google News in very little... so check out the insider scoop and the speculation on Engadget!

3. Free Niagara Server... This is not speculation... and I know this has been around for a while. However, I am interested in what Jonathan Schwartz [SUN's CEO] says...

And to answer a few of the comment questions - the offer applies to anyone interested - not just corporate customers. We don't care if you're an educator or a park ranger or a blogger or a physicist or a CIO - so long as you're in the market for the fastest/most efficient server on earth.

Posted by minghan at 9:32 PM No comments: Links to this post

Google have released Google Pages, a WYWIWYS web editor. Google Pages allows you to upload files and also select from an array of templates. Google Pages lets you upload any file and gives you 100MB of space (at yourweb.googlepages.com). [Read more]

A threat to free web hosting with advertisements? Maybe.


A little Apple update:
Apple have sold their 1 billionth song, marking the end of their Billion Song Giveaway campaign.

Technorati: Google
Posted by minghan at 10:45 PM No comments: Links to this post

Some new updates and stories that are making waves in the Linux community...

- Ubuntu DrapperFlight 4
- The evolution of Fedora Core Linux, [FC5 Screenshots]
- LinuxCaffe opens in Toronto!
- A new Linux Distro called VideoLinux (I think developers should focus on making current distros better instead of coming up with alternative distros)
- The Myth of a Linux Talent Shortage (Interesting article)
- Linux Format Awards 2006
Posted by minghan at 10:01 PM No comments: Links to this post

Connect Your TI-83 Calculator to the Internet

I just discovered that there are so many things you can do with a graphic calculator... including
- Connecting to the Internet to chat on IRC, read mail, etc!
- And of course... games!
- Mathematics, Graphics, etc
Posted by minghan at 8:35 PM No comments: Links to this post

Judging by the name, it seems to be another hard to understand law, but...

Sturgeon's Law
"Ninety percent of everything is crap". Derived from a quote by science fiction author Theodore Sturgeon, who once said, "Sure, 90% of science fiction is crud. That's because 90% of everything is crud." Oddly, when Sturgeon's Law is cited, the final word is almost invariably changed to `crap'. Compare Hanlon's Razor, Ninety-Ninety Rule. Though this maxim originated in SF fandom, most hackers recognize it and are all too aware of its truth.

Yeah... Sturgeon's Law is really crap.
Posted by minghan at 6:03 PM No comments: Links to this post

The Measure of a Man

Ever since the Danish cartoons were published, there have been numerous protests by the international Muslim community over the cartoons which many Muslims regard as offensive. Not a day goes by without a news report on some demonstration or peaceful protests over the issue. And to add insult to injury, some European newspapers also chose to publich the cartoons in a show of solidarity under the context of "freedom of speech".

I will not question the right of press freedom, but it is a fact that freedom comes with responsibility. Freedom is important, but it is also incontrovertible that a responsible press can do more to achieve world peace in this increasingly chaotic world. What is the worth of press freedom if it does more harm that good? Press freedom can be expressed in many more ways other than by such unfortunate means. But again, how should we react?

Posted by minghan at 11:07 PM No comments: Links to this post

Many of us use Wikipedia and some even take Wikipedia for granted.
So how much do you really know about the history of Wikipedia?

You might be interested to know that Wikipedia actually had many logos before the current one was settled.

To find out more about how these logos came about and the text in the old logos, read more here.
Posted by minghan at 10:03 PM No comments: Links to this post

Apparently Microsoft is having this programme called "Microsoft Office Live". There are 3 types of products: Basics, Collaboration, and Essentials. All are free during beta, but only Basics is free "during and after beta".

An extract from the site:

during and after beta

However, at the "Registration Complete" page, there is this line:

At this time, our beta is open to U.S. residents only.

Looks interesting... hope it will continue to remain as it is...
Posted by Jin Guan at 3:14 PM No comments: Links to this post

Check out Mozilla's latest effort in their campaign to become the premier web browser (as if it isn't the best already!). Create and ad for Firefox, and stand a chance to win! 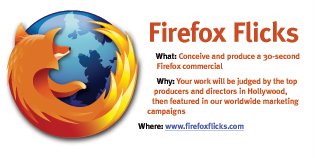 Posted by Eric at 12:23 AM No comments: Links to this post

Here is a small little trick... to solve the problem when your download speed is slow.

What it does is it uses the server where the PHP file resides on to download the file, through the particular server, and then form the server to your computer. This can significantly improve download speed if the server is near to you or where the file is on. The server will most likely have higher bandwidth... and this can be used to speed up the transfer rate.

Of course, there are other uses as well... like in China... where some websites are censored. So the trick will be to get to a website that is not censored (like some US hosting websites) and then download the file of that website. Its not hard to create a web-based proxy-internet-explorer of some sort with PHP.
Posted by minghan at 9:15 PM No comments: Links to this post

Medievia
They claim to be the most advanced game out there...

It may be a text-based game that has been around for 15 years (since 1991)...
but it boasts four million rooms that consist of 522 different areas to explore, a wilderness realm that is alive with adventure, and high seas that even the most strong-willed captain cannot survive.
and it certainly looks interesting...
read more to get addicted...
Posted by minghan at 10:15 PM No comments: Links to this post

"From a practical perspective, law enforcement agencies are always looking for places where they can get a great deal of information without much effort."

Read more about the privacy concerns over Google Desktop 3.


Also, "Gmail for your domain" allows you to have Gmail service for all user for your domain name. And according to Google Blog, San José City College (SJCC) is offering students email accounts using Gmail.
Posted by minghan at 9:36 PM No comments: Links to this post

New today @ Apple
More reasons to get an iPod now instead of a Creative Zen Player.
Posted by minghan at 10:58 PM No comments: Links to this post

Its the new gmail with web chat that everyone is talking about...
Really innovative... and a good way to attract users...
so will Microsoft/Yahoo copy Google now?
Posted by minghan at 10:49 PM No comments: Links to this post

I find the quotes in Wikipedia's article on axiom of choice very amusing.

The Axiom of Choice is obviously true, the well-ordering principle obviously false, and who can tell about Zorn's lemma? — Jerry Bona

Notice the use of the words intuitive, counterintuitive and too complex for any intuition. Even more fascinating, I also read that there is something called intuitionistic logic. Certainly, all these terms are not intuitive.
Posted by minghan at 9:33 PM No comments: Links to this post

Check it out. It seems that the anti-Microsoft mood is still quite prevalent amongst internet users around the world.

Still, M$ has made a valiant effort in making changes to their browser. I await to see what the final version of IE7 will be like.

See CNET Reviews.
Posted by Eric at 4:30 AM No comments: Links to this post