Some stuff about Mozilla (Mozilla as in Mozilla, not only Firefox):

It is highly standards compliant, supporting many standards from bodies such as the W3C, IETF, and ECMA.

As a result of the browser wars in the late 1990s, the platform has been heavily tested and is highly optimized and very portable. Not only have hundreds of Netscape employees and thousands of volunteers worked on it, but millions of end users who have adopted Mozilla-based products have scrutinized it as well.


Also, a thing or two about Firefox add-ons development:

WebMatrix actually looks interesting, maybe I should give it a spin.
Posted by minghan at 4:13 AM No comments: Links to this post

A friend pointed out this interesting product to me: 200 Mbps Powerline Ethernet Adapter.
Here's how it works: 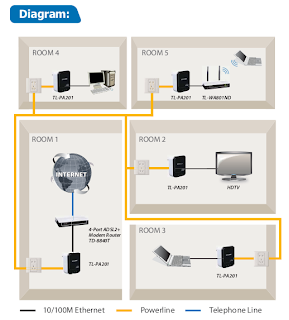 See also: Power line communication
Posted by minghan at 4:50 PM No comments: Links to this post

Posted by minghan at 3:32 PM No comments: Links to this post

This is a summary of 5 chapters from the book Basics of Qualitative Research: Techniques and Procedures for Developing Grounded Theory (2nd edition), by Anselm Strauss and Juliet Corbin.

Chapter 09: Axial Coding
This chapter describes the process of Axial Coding. Axial Coding is defined as "the process of relating categories to their subcategories". The objective here is to "form precise and complete explanations about phenomena" by linking the categories and subcategories. The chapter also introduces the traditional concept of "paradigm" (think Kuhn). The term "actions/interactions" is also introduced, seemingly as a replacement for the concept of "cause/effect", which can be contentious in scientific and philosophical literature (think Hume -- induction/deduction). But of course, the basis for this is based on the standard argument that the over-analytical use of "cause/effect" do not faithfully represent the many phenomena that goes on in the natural sciences. Finally, the authors propose the use of mini-frameworks and recording techniques to facilitate the coding process. Such frameworks can be simply diagrams (think Microsoft Visio).

Chapter 10: Selective Coding
Selective Coding is the "process of integrating and refining the theory". The book lays down the criteria for choosing a central category. The chapter again reinforces the use of diagramming to help with the analysis and representing the data abstractly. The practice of using memos is also introduced as a useful tool that guides the thinking process. Lastly, the process of refining the theory is explained. The techniques discussed for refining include filling up poorly developed categories, dropping ideas that do not fit (trimming the theory), validating the schema, identifying potential outliers, and appreciating the complexity and variety of data (building in variation.

Chapter 11: Coding for Process
In this chapter, "process" is defined as "sequences of evolving action/interaction... [that] can be traced to changes in structural conditions." An easy way to think about this is reducing process to phases or stages. Processes not only involve the flow and problems/issues, but also the conditions and the forms that the problems take. Process can also be broken down into subprocesses, which can be further broken down into action/interactional tactics. We can categorize the steps in a process, and to look at the process using a micro or macro viewpoint.

Chapter 12: The Conditional/Consequential Matrix
This chapter introduces the conditional/consequential matrix as "an analytical device to simulate analysts' thinking about the relationships between macro and micro conditions / consequences both to each other and to process." In justifying the matrix, the authors make several important assertions: (1) conditions and consequences are not independent, (2) Micro and macro conditions are often intertwined (3) conditions and consequences exist in clusters (4) action/interaction are not limited to individuals, but are caused by global bodies/organizations as well. The matrix is just an Archimedean spiral, where dark lines are used to denote interaction, and the spaces between the lines are the sources of conditions/consequences, and the arrows denote intersection structure with process.

Chapter 13: Theoretical Sampling
Theoretical sampling here is defined as the data gathering process that aims to create more categories. Sampling can be applied to open coding, axial coding and selective coding.
Open Sampling (for open coding): taking an open (open as in open to possibilities) approach to data as it comes by.
Relational and variational sampling (for axial coding): sampling for events that show relations and variety among concepts
Discriminate Sampling (for selective coding): here the researcher selectively chooses data that will contribute most towards comparative analysis.
Lastly, the authors assert that sampling should be continued until "each category is saturated".
Posted by minghan at 3:20 PM No comments: Links to this post

Interesting alternative to MySQL. See http://cassandra.apache.org/
Posted by minghan at 1:57 PM No comments: Links to this post

The Gedit Symbol Browser Plugin is a great plugin to get around large chunks of code quickly.

As the binary distribution for Unbuntu Linux hosted on sourceforge.net seems to be outdated/incompatible, I have downloaded the sources for gedit and the symbol browser and compiled them.

I am making the binary for the plugin available here.
Details: Compiled with Gedit 2.30.3 and gedit-symbol-browser-0.1 on Ubuntu Lucid 10.04 i386

Java coders doing JUnit testing should install this.
http://www.eclemma.org/
A more advanced code coverage tool is Clover, which you can try for [continuous] fully functional 30-day trial.
http://www.atlassian.com/software/clover/
Posted by minghan at 12:30 PM No comments: Links to this post

Creating a Launcher in Ubuntu

Here is how to create a launcher in Ubuntu, using the old school approach.

Say we are calling the launcher "Awesome". On your desktop, create a new file "Awesome.desktop". Put this in the file (ascii):

Finally, chmod +x Awesome.desktop
Posted by minghan at 1:02 PM No comments: Links to this post

By design, Bugzilla is programmed to return the string "zarro boogs found" instead of "0 bugs found" when a search for bugs returns no results. "Zarro Boogs" is a facetious meta-statement about the nature of software debugging. Bug tracking systems like Bugzilla readily describe how many known bugs are outstanding. The response "zarro boogs", is intended as a buggy statement itself (a misspelling of "zero bugs"), implying that even when no bugs have been identified, software is still likely to contain bugs that haven't yet been identified.

Source: http://en.wikipedia.org/wiki/Bugzilla#Zarro_Boogs
Posted by minghan at 12:55 PM No comments: Links to this post