Flickr Photo of the Day: Wood dowels for lanterns everything changes in large numbers

Wood dowels for lanterns, originally uploaded by paul+photos=moody
Posted by minghan at 6:18 PM No comments: Links to this post

Your computer's system clock is dependable on your CMOS battery. Which actually means that your computer's system clock is like your watch. If the CMOS battery runs flat, your system clock stops or reverts to its original setting (e.g. 1 JAN 2000) upon every reboot (You may also see such an error message - "Time Date not set"). Indeed, many first time computer users, and even some long-term users do not know this. Of course, this probably applies to those who are rich enough to change computers frequently as well.

Depending on your computer usage, your computer's (desktops and laptops) CMOS battery has a high chance of running flat after 5 years. The problem (of the system clock) arises when one switches off the computer for a longer period of time (e.g. 12 hrs), which is also when the energy from the capacitors are diminished.)

In my case, another interesting observation was the need to press the start button twice to boot the computer - the first to recharge the capacitor as the battery is flat, the second to use the available energy reserve (in this case the only remaining reserve has to come from the capacitor) to get the CPU started.

Thus, the solution will be to open up your PC casing and replace the CMOS battery mounted on the motherboard, such as in the photo taken from Compaq's website below. 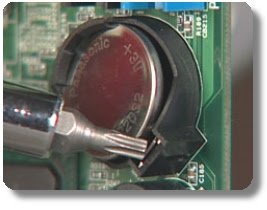 The CMOS battery comes in various types and sizes (it can be roundish or squarish).

To get a replacement battery is not hard. Open up your casing and note down the type of battery on the motherboard. The one in the photo is the Lithium Battery, CR2032 (3 Volt). This battery also happens to be found commonly in watches. Thus, one can go to a watch repair shop, or a shop selling watches, or your nearby equipment shop to buy a replacement battery. It does not matter which brand you use (Maxwell, Toshiba, etc). Remove the old battery and put in the new battery with the same orientation - the positive side of the battery, the one with words engraved, normally faces up (as in the photo).

Depending on the length of time since you last power down your computer and also how fast you change your battery, you may encounter an error message - "Invalid CMOS Checksum" upon your first reboot thereafter. This should not be of any worry - simply let the computer reboot again and you are done.
Posted by minghan at 8:47 PM No comments: Links to this post

A week ago, I chanced upon a good blog - Good Math, Bad Math. Basically, its a blog that discusses a wide range of science, from computer science to mathematics and physics, but with an emphasis on mathematics. The blog is written by a really cool guy - Mark Chu-Carroll, a PhD Computer Scientist working at Google. In many ways, the blog offers a platform for intellectual discourse - criticising and highlighting bad/flawed science and mathematics. This is a reminder that the very notion of science, no matter how grand it may seem, is susceptible to those who either manipulate it for their own means (e.g. General Relativity is not about all things being relative [not absolute]... just as relativistic speed do not refer to speed of light being undefined.), or confuse it unintentionally.

Currently, I am reading Mark's recent articles on Graph Theory.
Posted by minghan at 11:41 PM No comments: Links to this post