A recent article on TechCrunch featured the uptime of Google for different countries around the World.

Hm... sometimes we take a glance at these digits, but we don't notice the difference between uptime and availability, which can lead to misleading impressions.

As usual, Wikipedia provides the answer:

Availability is usually expressed as a percentage of uptime in a given year. In a given year, the number of minutes of unplanned downtime are tallied for a system; the aggregate unplanned downtime is divided by the total number of minutes in a year (approximately 525,600), producing a percentage of downtime; the complement is the percentage of uptime, which is what is typically referred to as the availability of the system. Common values of availability, typically stated as a number of "nines", for highly available systems are:

It should be noted that uptime and availability are not synonymous. A system can be up, but not available, as in the case of a network outage.

Anyway, here are some tidbits for regular readers:
- Mac Leopard Wallpapers
- Mac Tiger Wallpapers
- The 5th Wave RSS Feed
Posted by minghan at 5:56 PM No comments: Links to this post

Just as we brought you the wallpapers and the music, here's the sample videos from Windows Vista.

They are decent enough, but not as high res as I had hoped they would be.
Posted by minghan at 11:26 PM No comments: Links to this post

He actually said, "Think about the time you are living in. Like Donald Knuth is considered the father of computer science. He is still alive and he is still in this department. Its sort of like... you are living in the time of Euclid."
Posted by minghan at 12:37 AM No comments: Links to this post A superparamagnetic fluid, otherwise known as a ferrofluid, in a dish over a neodymium magnet.

What's That (64) originally uploaded by jurvetson
Posted by minghan at 10:07 PM No comments: Links to this post

I just discovered some useful Windows keyboard shortcuts, besides the standard ones I use frequently (like win+d [minimize all], win+r [run dialog], ctrl-b [bold text], ctrl-x/c/v).

And for Internet Explorer:

F4: Display a list of addresses you've typed
CTRL+ENTER: Add "www." to the beginning and ".com" to the end of the text typed in the Address bar
CTRL+LEFT ARROW: When in the Address bar, move the cursor left to the next logical break in the address (period or slash) (update: my friend was kind enough to point out that this also works for most input boxes; ctrl-home works too; you can combine this with shift to select words too)

Oh... and check out this cool Free Software Sticker Book.
Posted by minghan at 8:17 PM 2 comments: Links to this post 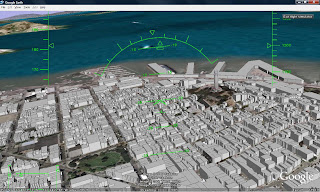 Flying over San Francisco. You can even make out Coit Tower in the distance.
You might have heard about it - there is a Flight Simulator built right into (as an easter egg) the newest version of Google Earth (the version in which the sky feature which allows you to view constellations in outer space, debuts.)

Firstly, for those who don't know yet, the "activate" the Flight Simulator, hit Ctrl+Alt+A (for Windows) or Command+Option+A (note it must be capital A) (for Mac) once you are in the newest version of Google Earth (version 4.2.0181.2634 beta). 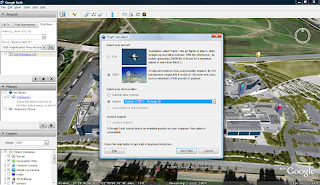 Once you have successfully activated the simulator, you will be greeted with the screen above. In addition, you will also be able to access the simulator from the menu [Tools > Enter Flight Simulator] after your first activation.

For beginners, the good places (with nice scenery) to begin are Sydney or Los Angeles. You also get to choose between the F16 or SR22. For starters, the SR22 will be easier to control as the speed is slower and it is easer to get accustomed to your controls. As mentioned in TechCrunch's comment, "F-16 is officially called the “Fighting Falcon” - the use of “Viper” is a common pilot nickname." 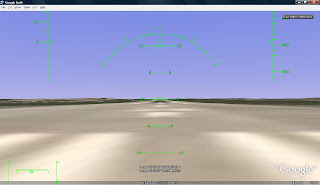 Once you have made your selection, you will get a view of the runway, as seen from the cockpit. Note: this is not a sign of bad graphics or whatsoever. Its just a runway!

To take off, press Page Up on your keyboard to increase speed. While continuing pressing Page Up, press the Down Arrow to get your aircraft to point upwards. Do not keen pressing the down arrow, as your plane may go upside down.

It is a MUST to take a look at the help manual for keyboard instructions.

How to interpret your screen 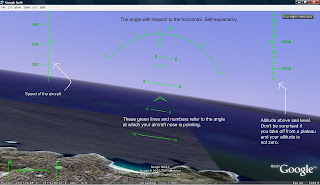 Landing your plane is very tricky, but it currently seems that you can land anywhere. For landing, a slow decent with the nose angle almost to nil is recommended. Once you know you are about to touch floor, continuously press Page Down to decrease the speed. Pressing the comma and period to brake both wheels should also help. The landing may be a little bouncy.

For the first few times you play, your plane may crash, and you can get a little dizzy looking the at the horizon spinning round and round.

It might be good to have a large cache and memory so that Google Earth does not need to re-stream the maps.

I hope this quick guide is helpful. Most importantly, have fun! 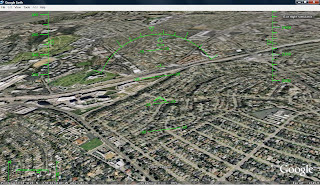 Flying over LA
Posted by minghan at 12:56 AM No comments: Links to this post