As children, we play LEGO. As adults, we reminisce the times we spent playing LEGO. Suddenly, I miss LEGO. Happy Birthday LEGO. I can't imagine my childhood without LEGO.
Posted by minghan at 10:42 PM No comments: Links to this post

Davos as a moment of reflection

The World Economic Forum was held in Davos, Switerland, from 23 to 27 January. It was a meeting of political and business heavyweights as well as influential figures such as Al Gore and Bono. This year's WEF took on a new dimension as Google, through YouTube, posed "The Davos Question" to web users worldwide. Google even set up a "YouTube Room" fitted with five computers (with digital cameras) for attendees to respond to the Davos Question.

For many bloggers, the YouTube room was a "silicon valley moment" in the making. Perhaps, the defining bit was not the two cents worth of the attendees, but the culture of participation that has pervaded the web and social computing. The room was also an arena which saw bloggers utilise web services such as flickr, twitter and qik alike, to democratize information.

It would have been hard to imagine all these happening a year ago.

If viewed a decade from now, Davos will be an insignificant speck of dust on the pages of history. However, Davos is just a case in point. The confluence of technology can only offer so much, but the adoption of technology, especially in third-world counties, is going to make the world an even better place in 2008.
Posted by minghan at 1:32 AM No comments: Links to this post This is the third picture of a series of the Licorne thermonuclear test in French Polynesia.

This is a scan of a (digitally restored) hardcopy of a picture taken by the French army which could be purchased in Tahiti at that time.

Licorne 3, originally uploaded by Pierre J.
Posted by minghan at 9:04 PM No comments: Links to this post

It has been a quarter of a century since Adobe was founded, and this year, Adobe celebrates its 25th anniversary. It can be said that Adobe has come a long way - from the humble beginnings of its PostScript language, to the ubiquity of its Acrobat and Photoshop software, and then to the acquisition of Macromedia along with its popular Flash software.

In a way, Photoshop has become the underpinning of the artistic world. As mentioned by Bruce Chizen in the video (read on), it's almost impossible to find something that was not created in Photoshop everywhere we look, be it illustrations in the newspapers or magazines, and even the covers of books.

So, take a trip down memory lane and look at the video celebrating Adobe's 25th anniversary or the comprehensive newsletter (direct download). You will discover a lot more about Adobe than you have ever known.

This week, Project10X published the Semantic Web 2008 Report, which is worth taking a look at. The report touches on topics such as Web 3.0, Social Computing and future trends.
Posted by minghan at 8:29 PM No comments: Links to this post

Last week, Steve Jobs gave his keynote at Macworld in San Francisco, and unveiled the Macbook Air. (Download Steve Jobs' Keynote). Although the Macbook Air comes with 1.6 Ghz Intel Core 2 Duo, an iSight Camera, an innovative multi-touch touchpad and a back lid keyboard, it is missing some other stuff. Of course, one only realises this after breaking out of Steve's Reality Distortion Field. Where is the firewire port and the Ethernet port?

Last week was also significant as I was nowhere near a computer during Steve Job's keynote. However, technological innovations have made it possible to get live updates half way round the globe. I used twitter to provide me live updates via my mobile phone (I don't have a 3G/wifi-enabled mobile phone). SMS (short messages) were popping in at about one every 5 seconds at its peak (imagine the excitement!). Sadly, the messages stopped coming just before Steve Jobs announced the Macbook Air. (I later learned that twitter crashed, probably due to heavy traffic from Macworld.) I waited about an hour before I received the delayed updates.


Anyway, I have finally uploaded the KDE 4 Wallpaper pack to omnidrive.
Posted by minghan at 3:58 PM No comments: Links to this post

For all Coke lovers and Bill Gates' fans... 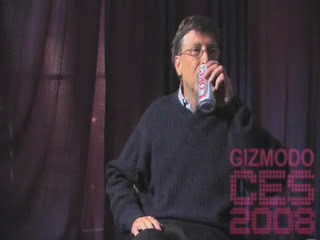 Bill Gates drinks Diet Coke during Gizmodo's CES 2008 Interview.
Posted by minghan at 4:01 PM No comments: Links to this post