HOST: I’m curious, have you ever googled anybody? Do you use Google?

BUSH: Occasionally. One of the things I’ve used on the Google is to pull up maps. It’s very interesting to see — I’ve forgot the name of the program — but you get the satellite, and you can — like, I kinda like to look at the ranch. It remind me of where I wanna be sometimes.

This is the link to the Bush interview regarding Google.


Anyway, here is a documentary on Google. Its called Google behind the screen.
Posted by minghan at 8:18 PM No comments: Links to this post

SUN Microsystems has developed a "data center in a box."

The expandable computer system, called Project Blackbox, is based on a standard 20-foot shipping container and can be deployed virtually anywhere there is electricity, chilled water and an Internet connection.

The water cooled system is painted black, and has seven racks of 35 server computers based on either Sun’s Niagara Sparc processor or an Opteron chip from Advanced Micro Devices. 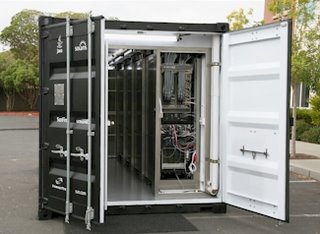 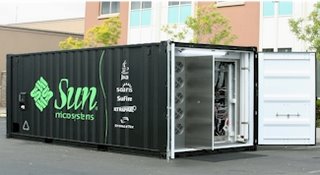 There can be no doubt that this simple idea can be revolutionary.

Update: more photos here
Posted by minghan at 9:04 PM No comments: Links to this post

What the world needs...

What the world needs is just some human warmth...
Posted by Wenberder at 11:16 PM No comments: Links to this post

Three-time Pulitzer Prize winner and New York Times columnist Thomas L. Friedman terms this era Globalisation 3.0 in his highly acclaimed book The World Is Flat: A Brief History of the Twenty-First Century. Friedman vividly describes 10 reasons which have shaped the flow of globalization.
In the book, Friedman begins by exploring these intriguing 10 flatteners and how technology as a whole, has been a key factor in challenging the frontiers of globalisation. Probably, every economist knows deep down in his heart, that there would not have been globalisation before there was technology, and that globalisation has only grown in strength because technological waves ebb and rise, pushing the shorelines of globalisation forever back, and to conquer it with its unpredictable nature. Of course, some would choose to liken globalisation to a runaway train on a collision course. Point of view.

But then, Friedman is different.
Posted by minghan at 1:32 AM 3 comments: Links to this post Milano.
Tin can town, originally uploaded by gian.
Posted by minghan at 11:21 PM No comments: Links to this post

Some people may have noticed that Firefox uses a lot of memory.
Here are some tips:
1. Config.trim_on_minimize set to true. This allows Windows to reclaim memory when the program is minimized (a feature prominent in IE 7). This value may not be on by default in Firefox. You may need to go to about:config, right click to add new boolean, and set it to true.
2. Browser.sessionhistory.max_total_viewers set set to '0', i.e. 32 MB.
3. browser.cache.memory.capacity

With these optimizations, and disabling of unnecessary extensions (like 'DOM Inspector'), I managed to run Firefox under 45 MB with 5 Ajax-based websites opened in tabs. More tips on reducing memory usage here.

Recently, Yahoo launched an electronic Time Capsule. This was overshadowed by a bigger news - Google acquiring YouTube for 1.6 billion bucks. [This was close to the initial estimates and rumours that were flying all over the blogopshere before the deal was sealed.]

Its a classic Silicon Valley story. And indeed, those are very, very happy men.

In addition, Microsoft just set a new record by releasing patches for fixing 26 security holes. Wow! =p
Posted by minghan at 8:55 PM No comments: Links to this post

Firefox 2.0 RC 2 is just out, and its uber fast.
Some of the new stuff in Firefox 2.0 I really like:
- Better support for previewing and subscribing to Web feeds. (You can assign Firefox to add your feed automatically to your favourite feed reader like Google Reader.)
- Inline spell checking in Web forms. (This is damn useful when you are blogging. The word that is spelled wrongly is underlines in red, and you can right click on it to choose the correct word.) [see screenshot below]
- Support for JavaScript 1.7 Some tips:
- If you don't like the default theme in Firefox 2 RC 2 and your current theme is not compatible, I recommend Azerty III.
- Don't forget to update your extensions. (the auto update does not seem to be foolproof)
- The download link. Tell the world!

Technorati: Mozilla Firefox
Posted by minghan at 10:17 PM No comments: Links to this post

A Game of Brinkmanship

Chess is a game of brinkmanship. It is a game that requires pure intellectual wit involving strategies, threats and bluffs. It is a game that amplifies the signifiance of the journey more than the destination. It is the game in the capacity of every word that can ever describe it -- mind-boggling, spectacular, intriguing, volatile, even fearsome. Indeed, these are immortal words for an immortal game. While a minor co-ordinate miscalculation may alter the trajectory of a starship by thousands of light years, a rash move on a chessboard is bound to have dire consequences. Imagine two opponents vying for every opportunity through focused deliberations and a pugnacious clash of tactics - there can be no doubt of its brinkmanship.

For now, its Kim Jong Il versus the rest of the world.
Will it be stalemate or checkmate? No one knows for sure.
Posted by minghan at 2:43 AM No comments: Links to this post

The PHP time function is defined as follows:

This presentation, normally using a 32-bit signed integer, is commonly know as the UNIX time format. This means that the latest time that can be represented in this format, following the POSIX/UNIX time standard, is 03:14:07 UTC on Tuesday, 19 January 2038. Times beyond this moment will "wrap around" and be represented internally as a negative number, and cause programs to fail, since they will see these times not as being in 2038 but rather in 1970 or 1901, depending on the implementation.

This Y2k38 problem, is reminiscent of the Y2K bug, which was also due to memory contraints. In the 1960s, it was the de facto standard to use two characters for every date field since storage were scarce and expensive (those were the days when RAM was measured in bytes). With many industries using computers at the turn of the millenium, there was widespread fear that computers would stop working at exactly midnight, January 1, 2000, leading to a global catastrophy.

Of course, the Y2K bug posted major problems, with many companies rushing to check their source code for the bug. The amount of work generated, however, greatly benefited India, as such work to check and correct source code was outsourced to India. Even Johns Hopkins foreign policy expert Michael Mandelbaum thinks that "Y2K should be called Indian Inter-depedence Day." This millenium bug is reputed to have cost the global economy $US 300 billion. Things could have been very different if early pioneers had more foresight.

Mark Twain once remarked that "20 years from now, you will be disappointed by things that you didn’t do than by the things that you did do." If history is to be any gauge, we can be certain that unless programmers start taking appropriate contingency measures to retify the bug, Y2K38 will post more problems in future.
Posted by minghan at 11:10 PM No comments: Links to this post

Mozilla Flaw is a Joke

Recently, 2 developers at the ToorCon hacking convention in San Diego claimed that there was "a previously known Firefox vulnerability that could result in a stack overflow ending up in remote code execution."

The duo called Mozilla's implementation of Javascript a "complete mess" and "impossible to patch," according to the article. The hackers reportedly claimed to have 30 more Firefox vulnerabilities that he intended to keep to themselves to set up "communication networks for black hats."

Unfortunately, its a case of jokers looking for quick fame. Maybe they could have been sued by Microsoft if they had played the same trick on IE. However, all these cannot distort the truth - the number of FireFox users continue to grow.

And of course, those two presenters have apologized. More comments by those involved can be found here.
Posted by minghan at 9:43 PM 1 comment: Links to this post