Agassi: The End of an Era

"The scoreboard said I lost today, but what the scoreboard doesn't say is what it is I have found. And over the last 21 years, I have found loyalty. You have pulled for me on the court and also in life. I've found inspiration. You have willed me to succeed, sometimes even in my lowest moments. And I've found generosity. You have given me your shoulders to stand on to reach for my dreams, dreams I could have never reached without you. Over the last 21 years, I have found you. And I will take you and the memory of you with me for the rest of my life."
-- Andre Agassi 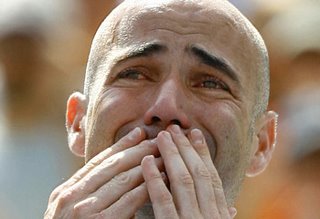 23,000 people at Arthur Ashe Stadium - they came from near and far to see his last match - the last of his 21-year career. And they gave him a tribute that lasted four minutes. Eyes filled with tears, Agassi rose from his armchair and moved to the center of the court for a second round of bows and kisses to the four sides of the arena, gingerly bending his bad back.

When asked if he would do it all again, Agassi shook his head no and laughed when someone pressed, "Why not?"
"Because I did it. I did it," Agassi said.
And this: "I'm at peace." (Source)