Germany vs Argentina ended with a brawl

The intense Germany vs Argentina FIFA World Cup match ended with penalties in which Germany downed Argentina 4-2 to proceed on to the semi-finals. But what followed was a 90 seconds brawl between Argentina and German players, the coaches, the refree and FIFA officials, infront of 72,000 astounished spectators looking on in the stadium and millions more worldwide on television. 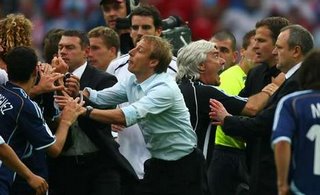 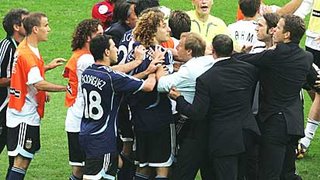 In the heat of the moment, the unexpected happens.

The trouble appeared to start when midfielder Tim Borowski gestured towards the Argentina players to "keep quiet" having scored his penalty to make it 4-2 in Germany's favour.

Punches were thrown in a brief melee before it was broken up.

"The first provocation came from Argentina, they were shouting at our players as they were going to the penalty spot. They shouted something in Spanish and we didn't understand what they were saying. But they were definitely trying to influence our strikers.

After Tim Borowski scored he put his finger to his lips to tell them to shut up. They were a bit mad at that. After that I didn't see much but I saw one or two lying on the ground. I didn't see what happened."

The brawl ended with Argentina's Leandro Cufre, an unused substitute, shown the red card by the referee after he was seen kicking Germany defender Mertesacker, and Mertesacker was left lying on the grass after being kicked in the groin.

This has go to be one of the most disgraceful moments of the beautiful game. It appeared ironic that while thousands of fans could coexist and stand side by side watching their countries fight for honour and glory, the players themselves betrayed their fans.

FIFA President Sepp Blatter was left to comment, "What I always say is in football you learn to win, but you also have to learn to lose." Sports when played on the international level, is cruel, but it does not mean that we cannot play it professionally. The Germany Argentina match was an intense match pitted against two giants - both deserved to go one to the semi-finals, but of course, there can only be one winner.


Anyway, the world cup does have an effect on Internet traffic:

A graph showing internet traffic decrease in the Netherlands during the 2006 FIFA World Cup game between Netherlands and Serbia & Montenegro on 11 June 2006.
Technorati: worldcup, germany, argentina
Posted by minghan at 6:08 PM